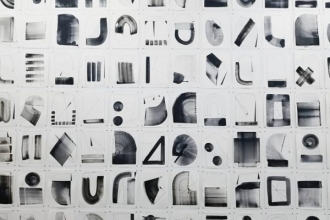 
In 1903 Sam Osborne retired from Colby College after working as a janitor for thirty-seven years. On Friday, July 1, 1904, Osborne died, and what followed was a stream of obituaries honoring and dishonoring his life. Each description, by known and unknown students and journalists, reveals the ways in which whites in the Colby community used metaphors of physics as a point of departure to construct biographies of a man seen and unseen. Nautical Dusk, a new project by visual artist Torkwase Dyson, is structured as an invitation to examine how physics metaphors function in relationship to geography, science, and architecture in these obituaries. These metaphors flatten and compress notions of belonging in the wake of the institution of slavery. But in their excess, they open up possibilities of critical environmentalism, descent, and capability. Dyson approaches the archive as a dialectic to consider this ecosystem.

As a Lunder Institute visiting artist, Dyson will construct a group of architectural sculptures that ask us to consider the physics of atmospheric light, scalar space, and intuition in the wake of a changing climate. In this space of structures, Dyson composes a condition in which to imagine the implications of this change and to think about how such change influences and is influenced by political and social abstraction. She will spend time on campus working with astronomers, poets, historians, performance artists, environmentalists, and social scientists unpacking the language from the Colby archive to produce questions and propositions on spatial relationships and the science of abstraction today.