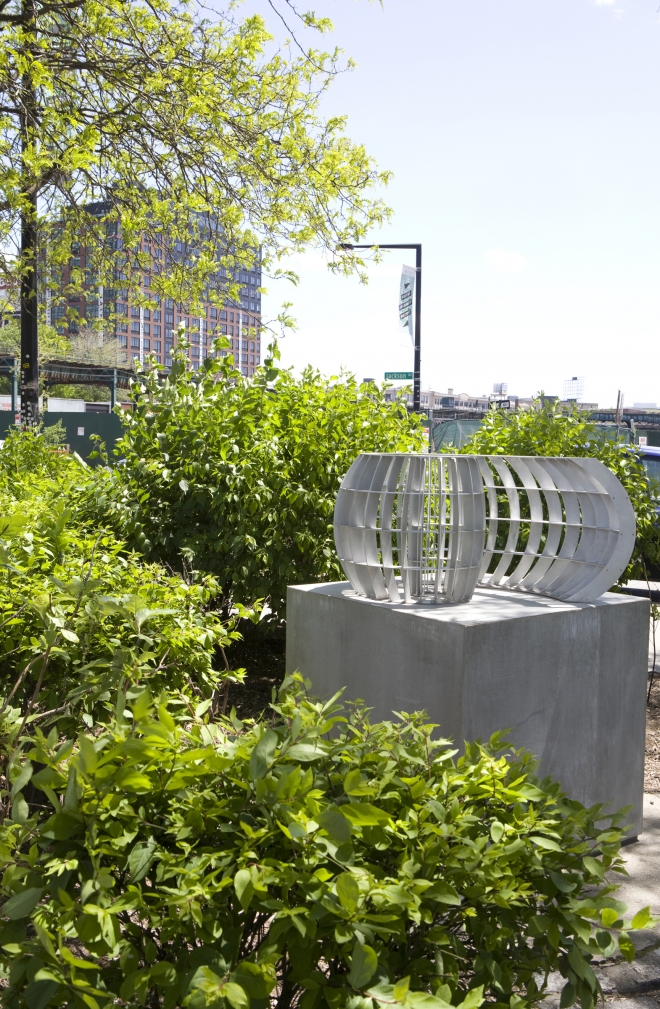 Unfurling by Mary Ann Unger on view through October 24, 2016

An aluminum sculpture by the late artist Mary Ann Unger is now on view at the NYC Parks Greenstreet on Jackson Avenue and 46th Avenue in Long Island City, Queens. Created in 1986, Unfurling is Unger’s first artwork to be displayed with Parks and will be on view through October 24, 2016. Unger exhibited her work at both MoMA PS 1 and SculptureCenter during her lifetime, bringing her work full circle as it is installed adjacent to these Long Island City institutions.

Unfurling reveals the dichotomy the artist was known for in her public artworks: geometric, architectural forms crafted with strong, organic, man-made materials. Inspired by nature, her curvilinear aluminum works allow an interplay between weight and weightlessness, between mathematical structure and airy transparency. These works are contemplative, inviting, and offer an opportunity for nature and the urban environment to collaborate. This work was rendered in an intimate scale and is elevated to the viewer’s eye-level by a plinth. Unger had envisioned Unfurling as a larger piece, in keeping with her other life-size public works; however, a larger version of this piece was not realized in her lifetime.

Encouraging gathering and communing with nature, Unger’s public works reference beehives, temples, trees, waves, and sanctuaries for spirituality. The size and shape of her larger works invite visitors to move through their skeletal and grid-like forms. A veteran of public art, Unger’s outdoor works are on permanent view at The Fields Sculpture Park at Art Omi, the Philip and Muriel Berman Sculpture Gardens at Lehigh University, and the Aaron Copland School of Music at Queens College, among other institutions.

Mary Ann Unger (1945 - 1998) was a celebrated sculptor best known for her large-scale works evoking the body, bandaging, flesh, and bone. She died of breast cancer in 1998 at the age of 53. Roberta Smith wrote in her News York Times obituary, “(Unger’s) works occupied a territory defined by Eva Hesse and Louise Bourgeois. But the pieces combined a sense of mythic power with a sensitivity to shape that was all their own, achieving a subtlety of expression that belied their monumental scale.”

Unger's work is included in numerous private and public collections, including the Hirshhorn Museum and Sculpture Garden, the Brooklyn Museum, the Philadelphia Museum of Art, the Albright-Knox Art Gallery, and the High Museum of Art. Her works have been reviewed in many publications, such as The New York Times, Sculpture Magazine, Art in America, and The Village Voice. During her lifetime, she had numerous solo exhibitions, more recently, taking place at the Maxwell Davidson Gallery, in 2011 and 2016. In 2008, the Mary Ann Unger Estate was founded in New York City in order to further the understanding and appreciation of Unger’s artwork. The Estate, in collaboration with the Maxwell Davidson Gallery, facilitates the ongoing placement of Unger’s work in museums and private collections and exhibits a rotating selection of her works.

NYC Parks’ Art in the Parks program has consistently fostered the creation and installation of temporary public art in parks throughout the five boroughs. Since 1967, collaborations with arts organizations and artists have produced hundreds of public art projects in New York City parks. For more information visit www.nyc.gov/parks/art.