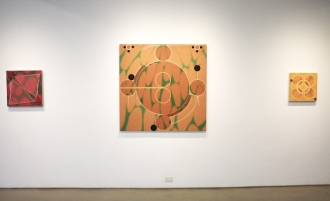 Artist Angela Heisch relishes the physical effort involved in making work—the repetitive motions and hours spent in the studio that distort her sense of time and transform her ideas. Standing before the eight paintings and six sketches that comprise “Trapeze,” her current exhibition at Davidson Gallery in New York, she told me “how important that process still is” for her lively abstractions.

As frenetic as those works are, they result from careful deliberation. The New York–based artist has built up a distinct vocabulary of madcap shapes and forms, and she’s been exercising restraint when it comes to tapping into that store for any particular work, she said. “It’s the biggest struggle but the most satisfying thing for me, because that’s the thing that’s the hardest: holding back and leaving it alone.”

In the complex new works in “Trapeze,” which can suggest Tomma Abts spliced together with some superb but unknown Imagist, circles preside over universes of fuzzy amoeba, spinal columns dance on the thresholds of unknowable realms, and geometric constellations are framed by floral silhouettes. Each painting challenges the viewer to decipher where one world ends and another begins.

Heisch said that the title of her show, which runs through Saturday, “comes from finding resolution in my paintings through balance—visual balance.” Departing from her past interest in architecture, “Trapeze, ” which is her first Chelsea show after a string of well-received exhibitions in Brooklyn, is focused on suspension and freeze-framed motion. She attributes this shift, in part, to time she’s spent sketching in her garden rather than atop subway platforms and sidewalks in New York (her usual venues).

Spending time with nature has brought to the fore what Heisch termed her “phobia of symmetry”—an aversion that is much in evidence in her recent works. But while none of these paintings is perfectly symmetrical, a few, like AROUND and PULL APART (both 2019) get dangerously close. The former features two large orbs and two teardrop shapes orbiting a central point, and the latter hosts a kite-like, translucent creature that appears to float precariously above the canvas.

Historically speaking, Heisch has had a complicated relationship with instances of near-perfection found in the natural world. “When I was in high school, I printed out all these photos of moths and butterflies and made a book of them,” she said. “I would give them really silly names to help me be more okay looking at them. I used to be terrified of mushrooms and I just got over that.”

She makes slyly discomfiting paintings that grow weirder as you look at them. Each, in fact, possesses a set of eyes, though they may take some hunting to locate. In older works, Heisch painted what she calls “inarguable faces” of people, which she’s since reimagined in more subtle, and sometimes disconcerting, terms. “It’s sort of like confronting the viewer with something that’s unknown and makes you a little uneasy but also kind of curious,” she said, explaining that she aims to make work that “wants to play with you and wants to interact with you. But you have to be fine not knowing what it is, specifically.”